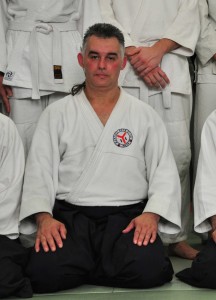 Christo Mihaylov is born on 27th September 1962. He has started practicing martial arts in 1976. He has practiced kyokushinkai karate and taekwondo, wushu and tai chi chuan, until he finally discovered his devotion – AIKIDO. He started practicing Aikido in 1987. Today he is holder of a 5th dan. He has taken part in the establishment of the Bulgarian Aikido Federation, as well as in the establishment of many clubs all over the country.

He is the president of one of the biggest clubs in Bulgaria.

In September 2004, he has spent a month of Aikido practice in Japan (Ibaraki dojo) and afterwards he has participated at the 9th Congress of IAF. Many periods of practicing in Japan have followed, as well as participations at the 10th and 11th Congresses of IAF.

Currently he is member of the Management Board of BAF and head of its Technical Commission. In his capacity as such, he has participated in the organization of domestic and international seminars with some of the best Aikido masters, hosted by BAF.